I have been posting about my aquaponics system for a while.  It has been a project that took a lot to get off the ground.  We built the greenhouse, had to build the beds, find the tanks, order the grow media, order the pond liner… we have struggled with pumps, water pH, algae, freezing temps and many other hurdles.  But finally we have tilapia in our system.
We actually got the tilapia in the mail about a week ago, I took pictures and wanted to post about them right away, but I was really worried I would kill them all in the first week.  Which would be so embarrassing to have to come back and write another post about how I really have no idea what I am doing.  So I waited a week to post anything about the fish.  The good news is that they are still alive, however I have realized I still have no idea what I am doing.

Ok back to the fish, we ordered them from a hatchery in the mid west and they were shipped over night to us.  They arrived in a foam cooler with a bag inside filled with oxygen.  The first thing I did was open the bag and put an air bubbler in, thinking that was the smart thing to do.  However, about 30 seconds after I did that my husband pointed out that was not what I was suppose to do and asked me if I read the instructions… which of course I gave to him to read so I did not have to.  After letting the fish rest for a couple of hours we began adding a cup of our water to the water they were shipped in.  We needed to get them adjusted to not only the temperature difference but also the pH difference.  After a couple hours of that, we took their bag out and set it in our tank.  This would better get them adjusted to our water temperature.  After another couple of hours we put them into our tank and sat and stared at them for a while.  Apparently, that was also in the instructions, or at least that was what my husband told me after we realized an hour had passed and we were still looking at fish.  I am not sure if that was in the instructions or not, because I still have not read them.

So we have enjoyed the introduction of the tilapia.  We are learning as we go.  The first thing that we learned is that they were A LOT smaller than we thought they would be.  I know that we ordered fingerlings, but they look more like guppies to me.  They are about the size of the feeder fish you see that the pet store.  Second, we are learning that they eat a lot of food.  We feed them a couple times a day and the food is gone within seconds of it hitting the water.  The last thing that we learned is that our water was really green.  After staring at it for hours 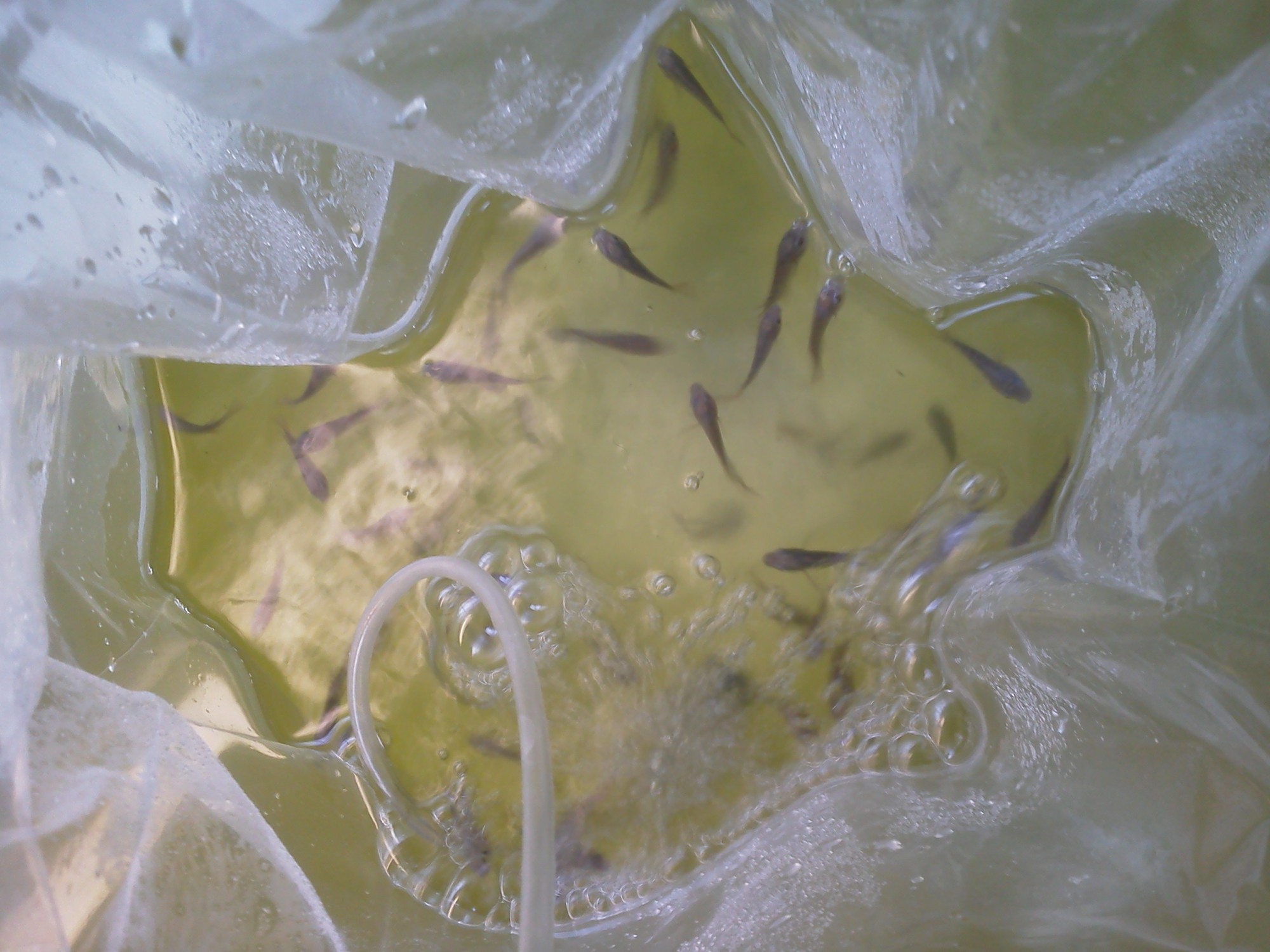 , we realized we need to do something about our algae problem.  So we bought and installed a in-line UV filter… now the water is clearer and it is much easier to stare at the fish for hours.  It really is relaxing, you should try it.

In 9 months, I hope to be having a fish fry in the back yard to celebrate our aquaponics system!