As always it was been way too long since I have written an update.  Today’s blog post is purely a couch therapy session with World Wide Web.  Thank you for allowing me to get this morning off my chest!

Our fabulous pigs are finally old enough and big enough to go to slaughter.  They had such a great personality and were so sweet, but their size was really starting to become a problem.  They are very, very strong animals and ours had behaviors similar to dogs.  When we went into the pen to feed or water them, they would rub on you and go between your legs, or lean into you.  Well, 275 pounds of pig leaning into the back of your knees makes it difficult to stay on your feet.  That was just if one of them came over, when they both wanted attention and to love on you, it was down right dangerous, our son was knocked over and it was very scary.  In addition to their size, they really do not like the cold weather or the snow.  It became difficult to get them water and we have not been able to move their pasture so the mud was getting too deep for my liking.

So it is time to slaughter!  We had made our appointment months ago, we had no idea what the weather was going to be or what would be going on in our world on the day of slaughter.  Last week I found out that I have a torn tendon in the same foot I just had reconstructive surgery on. I am back in the fashionable walking book cast thing.  Not really where I planned to be 6 months after my reconstruction surgery. In addition to me not being 100% there was a winter storm warning in effect for our area.  Not really the ideal time to take a trailer back into the pasture in the mud and haul pigs out. So this combination was stressful enough. To add to the stress, when we borrowed the trailer from a friend, we decided to also buy 90 square bales of hay to stock up until after spring.

So the pigs are suppose to go to slaughter on Tuesday morning no later than 8am.  Monday morning we wake up at 430am we looked at the forecast like every good farmer and see that the rain/ice/snow event is not suppose to start till after dark Monday night.  Perfect.  My husband can go to work, when he comes home we will unload the hay from the trailer and load the pigs before dark, perfect plan.  WRONG!  When I checked the weather again at 930 the timeline for the storm moved to 3pm and the fields were already muddy from the melting snow.  Great, by the time we unload the hay tonight, the fields will be a complete slip and slide.  There is no way we would get that horse trailer out.

So me and my fashionable boot had to unload the hay bales so that my husband could focus on getting the pigs in and the trailer out of the field ASAP when he got home.  Luckily, I had some help unloading the trailer, but it was still hard on my foot.   My husband arrived after work and with the help of another friend were able to get the pigs on the trailer much smoother than we imagined.  Getting out of the muddy field was a struggle, but even that happened easier than I thought. 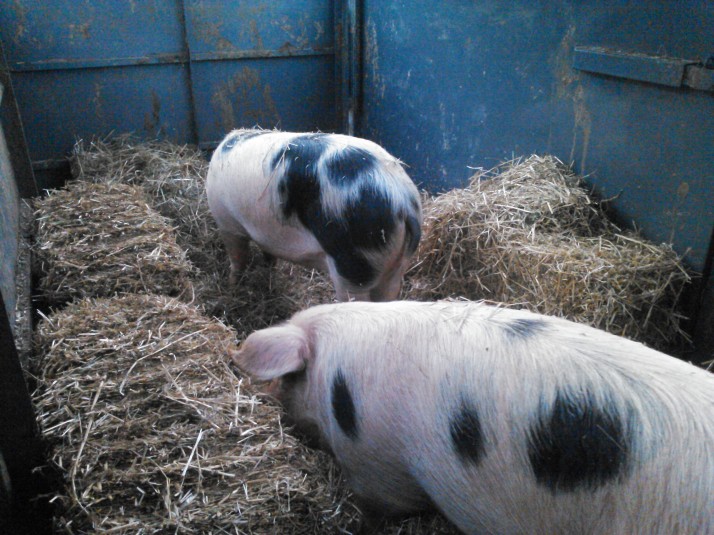 OK now the pigs are happy and on the trailer for the night.  We were suppose to get ice and snow all night.  When we woke in the morning we were thankful to see that the roads were not covered.  We loaded the kids in the truck and off to the butcher we went!

This is when the nightmare happened.  Apparently, we were in a warm patch, because when we got 5 miles west of our small farm, the roads were covered with snow and ice.  It was still dark out, the snow was falling so fast you could not see 10 feet  in front of the truck and there was so much ice and snow on the ground that we could not stop.  There was several times I saw the rear trailer lights in the side view mirror.  There was a couple times we were on the wrong side of the road because of a slide and low visibility. We missed our turn and ended up going 25 miles out of our way because the roads were so bad that we could not stop to turn down a side street without jack knifing the trailer.  The butcher is normally 30 minutes away it took us an hour and a half to get there.

Once we arrived we were not out of hot water yet, there was no open holding pens for the pigs.  We had to wait for 30 minutes or so for them to be able to go in.  This was a blessing though.  Our babies were in the trailer, sleeping  and getting extra love right up until the time they went into the “back room” area.  They were never under any stress or had any fear of what was going to happen.  They were completely relaxed to the point of snoring up until moments before their lives ended.  That is exactly how I wanted it to be.

Now we have dropped off the pigs.  We are still 25 miles from home and it is still snowing really hard.  Luckily the sun had come up at this point.  The first 20 miles of the ride home was very uneventful.  We took a Southern route home which made a big different in road conditions.  About 5 miles from the house, the alternator goes up on the truck.  We have to get home in the snow with whatever battery power we have left.  Of course we hit every stop light possible in the 5 mile stretch.  Finally we made it home, three and a half hours later!  We were all stressed.  I made another pot of coffee and sat down to vent to you.

Thank you for this therapy session, I needed to get it all out!  It has been a roller coaster ride.  I am glad we are all home safe and we are going to have a quite day to allow our blood pressure to go down.  I hope you stay safe this winter and I will write again soon.