The height of peach season has begun.  The farmers market had 1/2 bushel of peaches for $12.  The sweet taste of peaches in the dead of winters is one of my favorite things.  It is like canning a ray of sunshine.  This is the second year that I have canned peaches as an adult.  I used to can with my mother when I was younger, but I think the only job I had then was to eat as much as I could before she put it in the jar.  So as an adult with the Ball Canning Guide by my side I learned how to can peaches, I still eat some as I go, I can’t help myself.

OK back to my 1/2 bushel.  Some of the peaches were bruised and not too good for canning as just peaches so I made them into jam.  For the first time I used someth 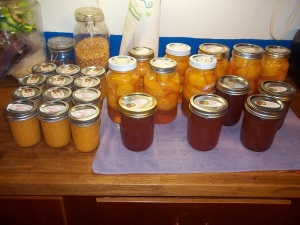 ing called No Sugar needed pectin.  I was nervous.  When I made jam with my mom sugar was a major ingredient.  However the No Sugar pectin worked great.  I just followed the directions on the bottle, it was easy and I got great jam out of it.

The second thing that I did with my peaches was just can sliced peaches. I washed and blanched them to removed the skins, then I just sliced them into quarters.  I made a simple lite syrup using very little sugar.  I raw packed my jars, meaning I did not cook the peaches, and I poured my lite syrup on top.

The last thing I made was peach “juice”. At the suggestion of a friend, I took all the skins and pits and boiled them for about 45 minutes.  The idea was to make peach jelly.  Ryan decided that he would rather have “juice”. Using a kitchen towel I drained the liquid off, put it in jars and canned it for 15 minutes in my canner.  It will be great peach tea or juice in the winter.

So my 1/2 bushel became 12 half pints of jam, 8 quarts of peaches and 5 pints of juice.  All in all it was a very productive evening and I think I got my $12 worth out of those peaches.